In our NFL preview post, I speculated that the New Orleans Saints could potentially break out their throwback uniforms from the 1960s as part of their celebration of their 50th season. Not only did they bring back the throwback look as part of their Color Rush set, they’ve decided to go ahead and wear the actual throwbacks for their Week 13 tilt against the Lions.

Unlike their rival Atlanta Falcons who had to go with a fauxback look due to the NFL’s one-helmet rule, the Saints are still wearing gold helmets like they did when they wore this design, so that means that all they’ll have to do is (probably) switch from a black facemask to a gray one and switch their decals to the Fleur-de-Lis that they wore back then.

I threw in the “probably” in parentheses because while the Saints wore the gray facemasks back in 2002, they kept the black facemasks when they wore the throwbacks in 2011. We’ll see what they do this time, but here’s hoping that they go with gray just for authenticity’s sake. Their 2002 look with the gray facemask 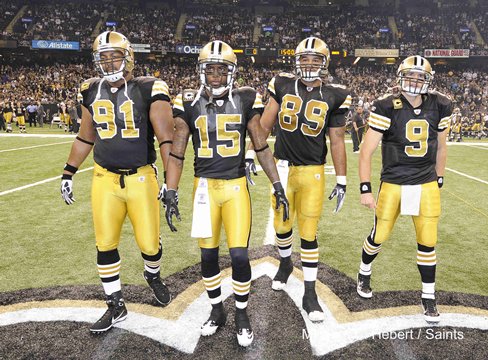 Their 2011 look with the black facemask

Either way, the New Orleans Saints figure to be one of the better-dressed teams in the NFL this upcoming weekend. They were already the owners of arguably the best Color Rush uniform in the league, and now they’ll have a chance to show off a very solid throwback look on Sunday.